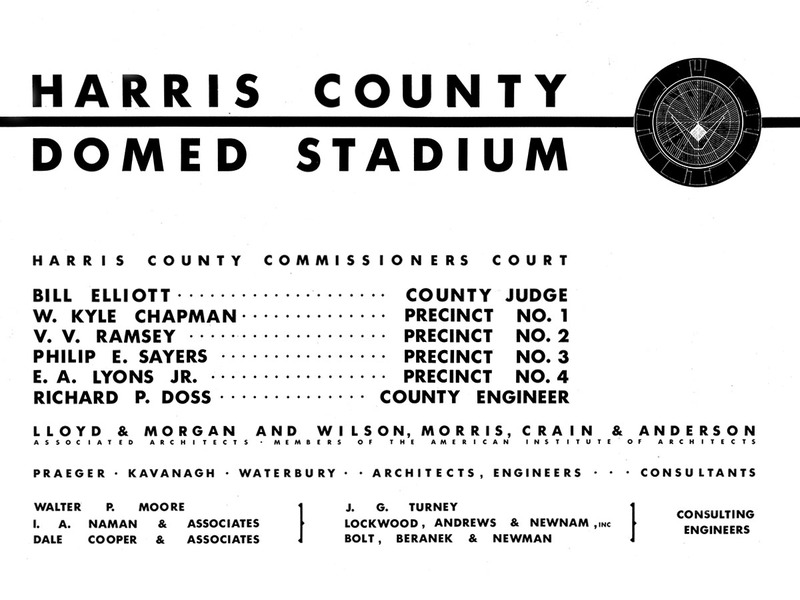 When it opened in 1965, the Harris County Domed Stadium -- the Astrodome -- was the largest fully enclosed, air-conditioned stadium ever constructed, containing the longest open span ever built.  The record for longest clear span—the distance between walls or support towers—had previously been held by the Union Tank Car Building near Baton Rouge. Designed by Buckminster Fuller using his geodesic design and completed in 1958, the dome spanned 384 feet: the Astrodome would end up at 642. Furthermore, it would be configurable for baseball, football, exhibitions, boxing matches, and any other use that required a large open space.

The original Harris County Domed Stadium blueprints, created by the architectural firms of Lloyd and Morgan and Wilson, Morris, Crain & Anderson (the "Associated Architects") along with the engineering firm Praeger-Kavanagh-Waterbury, were finalized October 6, 1962. Some of the consultants who assisted with preparation of the blueprints were Walter F. Moore; I. A. Naman & Associates; Dale Cooper & Associates; J. G. Turney; Lockwood, Andrews & Newman, Inc., and Bolt, Beranek and Newman.

The Harris County Public Infrastructure Department Records unit has digitized the blueprints and makes them available under the Texas Public Records Act. A copy of the blueprints, in reduced format, is also available at the Dolph Briscoe Center for American History at The University of Texas at Austin, where they are part of the Robert J. Minchew Houston Astrodome Architectural and Engineering Collection collection. Individual sheets of original blueprints are also available from other archival repositories.