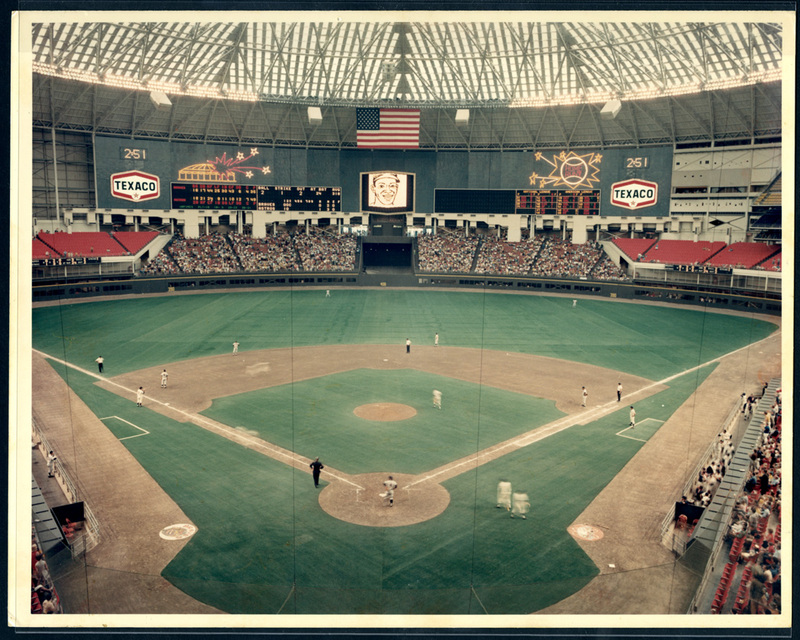 The first game ever played on AstroTurf was Astros vs. Phillies, on July 19, 1966. The Astros won, largely thanks to pitcher Turk Farrell, who pitched a complete game and hit a three-run homer.

The Astros hosted the All-Star game in 1968, the first played indoors. Sachel Paige had declared the Dome to be a pitcher's dream, and this game bore that out: there were a total of eight hits combined in the entire game.

Other notable decade highlights include a 24-inning, six-hour game against the Mets in 1968 (won by the Astros by one run), and the blossoming of pitcher Larry Dierker, winner of 20 games in 1969. He became an All-Star and team MVP that year as well. It was that final year of the decade that the Astros rose above the .500 mark for the first time.

Dierker would go on to break virtually every Astros pitching record, including career records of starts, innings, and complete games. He also holds the single-season record for complete games: 20. 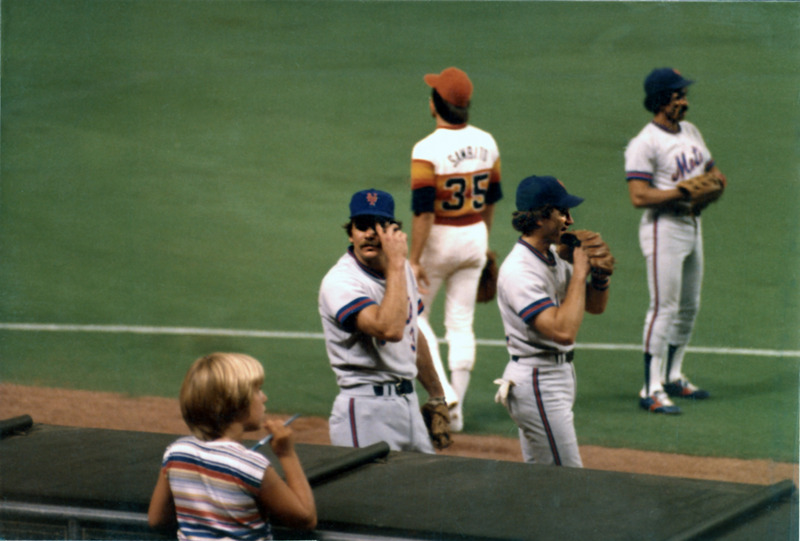 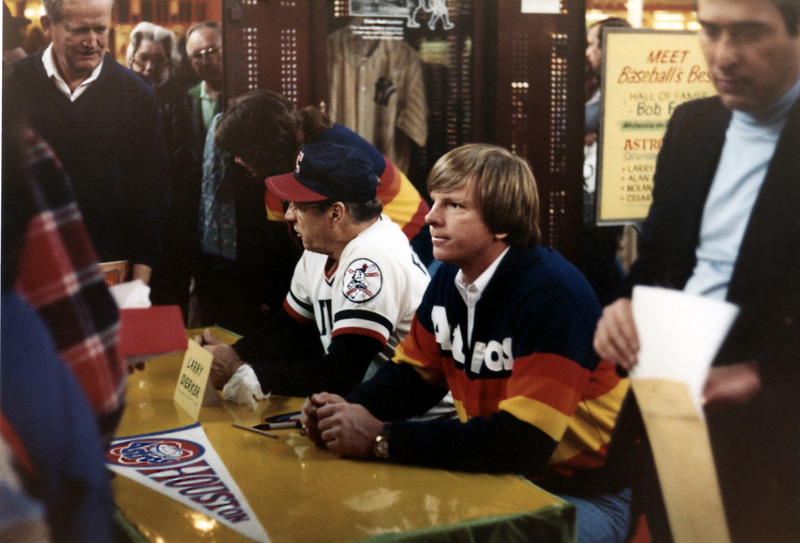 In 1972-3, the Astros posted two winning seasons in a row, under the legendary manager Leo Durocher. In 1975 old Houston hand Tal Smith returned to the Astros and hired Bill Virdon to manage. Smith was an early proponent of using data to improve outcomes, along the lines of what would eventually become known as sabermetrics. Virdon would stay for seven years, longer than any other Astros manager.

Unfortunately, the team didn't break .500 again until 1979. But that year, fans got to cheer pitchers Nolan Ryan, Joe Niekro, and J.R. Richard. It was quite a year for Astros pitching: Niekro won 21 games, Ryan had an ERA of 2.45 at home, and Richard struck out 313 batters in one season--the highest number for a right-hander to that time.

In 1970 the Harris County Commissioners considered implementing a smoking ban in the Dome, but punted the decision to Hofheinz, who did not act (Ray, 452). One 1970s innovation that was far more popular was "Foamer Night," during which fans got free beer if Astros pitchers threw strikeouts while a certain scoreboard light was on. 1977 also saw the debut of Astros' mascot "Chester Charge," a soldier riding a puppet horse.

Other notable events included the 1976 "rainout," the only one in the history of the Astrodome, which was actually a scenario where the area around the Astrodome flooded so badly that the game was cancelled for the safety of the fans, staff, and players travelling to and from the ballpark. 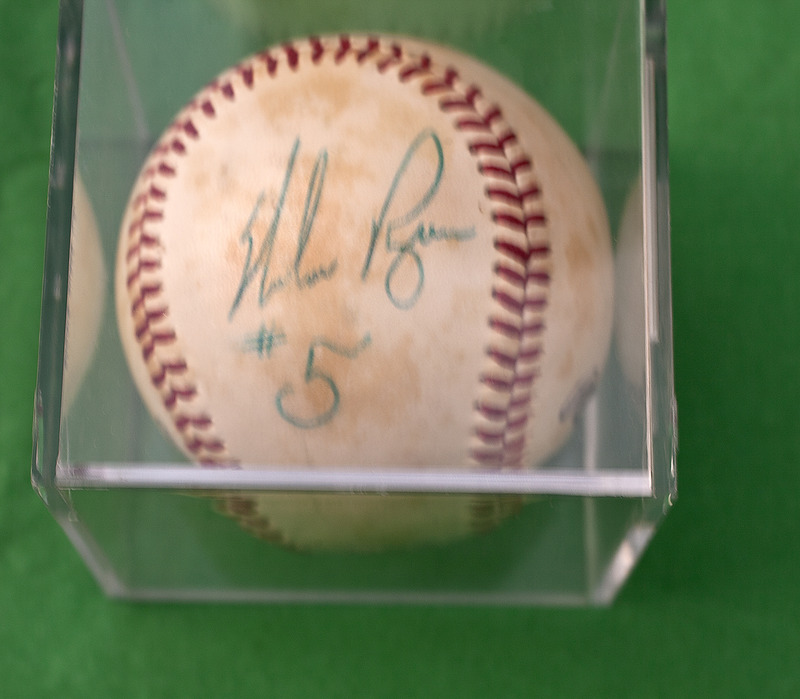 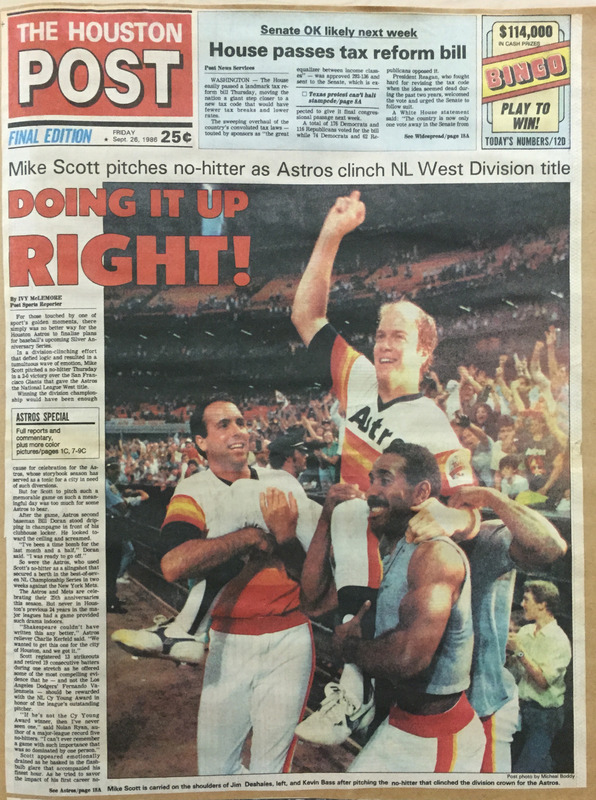 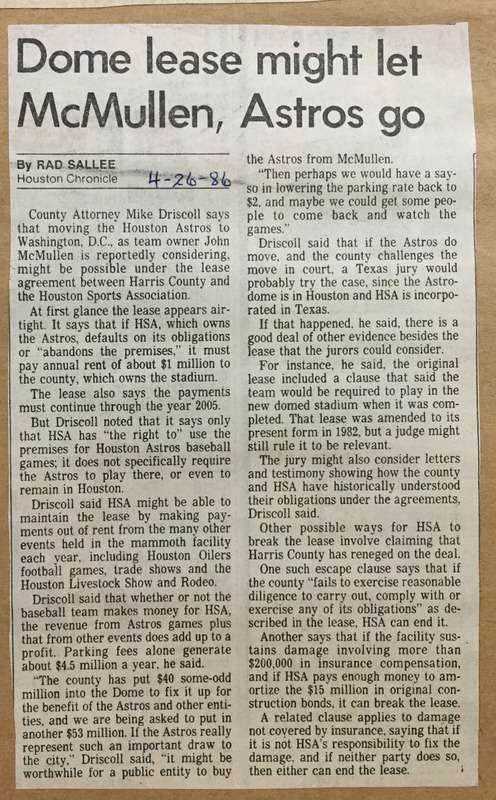 Now under the new ownership of former Yankees' partner Joe McMullen, the 1980s started with the Astros' best-ever performance. At the Astrodome, they were indomitable, with a record of 55-26. In the 1979 off-season they signed native son Nolan Ryan for the unheard-of salary of one million dollars per year.

After faltering late in the season, they made it to the playoffs by the skin of their teeth by winning a one-game playoff against the LA Dodgers. They went on to play the Phillies in the National League Championship Series, in a brutal best-of-five series that included four consecutive extra-inning games. After being tied at two games each, the Astros lost the final game, and the series, in heartbreaking fashion.

Even worse, in July 1980 star pitcher J.R. Richard was felled by a stroke, at age 30. He had been on track to be one of the very best, that season alone holding a 1.90 ERA and a 10-4 record. Although he would attempt to mount a comeback attempt, he was never again the same dominating force.

1981 saw Nolan Ryan hurl the fifth no-hitter of his career, and despite the players' strike Astros fans witnessed their team advance to the divisional series, and then win the first two games in the Astrodome. After that, however, the Dodgers took the next three, and the Astros again advanced no further.

Although 1982 was disappointing, the next three seasons were solid, notable for another record broken by Nolan Ryan: surpassing Walter Johnson in career strikeouts. In 1983 the Astros acquired Mike Scott, who became the linchpin of the pitching rotation from 1985 until he retired in 1991.

In 1986 Houston again hosted the All-Star game, and saw Boston's Roger Clemens throw three perfect innings for the AL squad. In 1986, unlike 1980, they started strong and there was no faltering. Pitcher Mike Scott clinched the divisional title in spectacular fashion, by throwing a no-hitter--the only time that this has ever happened in Major League Baseball. In 1986 the smoking ban was finally implemented for the Dome during sporting events—though rock concerts were granted an exception.

The Astros went to NLCS, in what turned out to be one of the best series and one of the best playoffs in baseball history.  The Mets were up 3 games to 2 for Game 6 at the Astrodome, and despite facing a three-run deficit, they came back and tied it in the 9th. The home team lost in the 16th inning.

The Astros lost Ryan to the Texas Rangers when his contract expired in 1988, and the rest of the 1980s were a wash. However, the team gained players like Craig Biggio who would be important later on. Once again their best showing was at the end of the decade, in 1989, when they finished in second place in the division, six games out of first. It was a good sign.

In 1986, McMullen considered moving the Astros to Washington, D.C., partly due to conditions in the Astrodome. Although the Houston Sports Association, the parent company of the Astros, had a forty-year contract to manage the Astrodome, the Harris County Attorney Mike Driscoll offered as his opinion that the lease did not obligate McMullen to keep the team in Houston. Fortunately, this opinion was not put to the test. 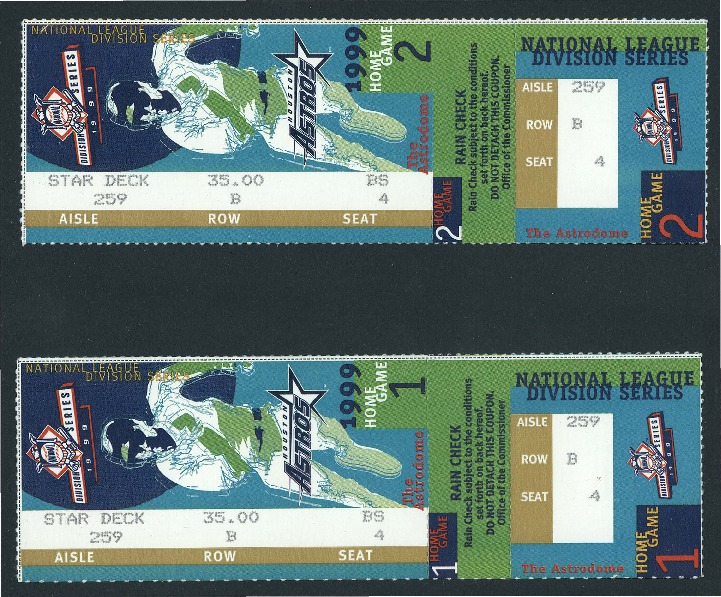 For Astros fans, the only good things about 1990-91 were the arrival of Jeff Bagwell, who was Rookie of the Year in 1991 and (perhaps) the arrival of new mascot Orbit, an "alien" whose antennae ended in baseballs.

In 1992, Drayton McLane became the owner of the Astros. Despite having to travel on the longest road trip in MLB history, the team finished 16 games better than they had the previous year. Smoking was finally banned in the Dome, as across Houston, for all events.

The next several years were good ones, with Bagwell unanimously voted National League MVP in 1994. The Astros got a new manager, Terry Collins, that same year, which was also shorter than usual because of the players' strike. Bagwell and Biggio were both chosen for the NL All-Star team.

While 1995 was solid, 1996 saw the Astros fall apart in September and fall from first place in the new NL Central Division. 1997 and 1998 saw strong seasons under new manager Larry Dierker (Manager of the Year in 1997) but quick eliminations from the playoffs. Meanwhile, big changes were afoot: the new owner asked for a public referendum on building a new stadium downtown. It passed in 1996.

The Astros set attendance records during their last year in the Dome. Games were often filled to standing room, and the team rewarded their fans with a win of the division in dramatic fashion, on the very last day of the season.

Unfortunately, the very last Astros game played at the Dome was also the end of the team's playoff hopes. After splitting Games 1 and 2 in Atlanta, the Braves surged back in the 9th inning of Game 3 at the Astrodome. The demoralized Astros lost the next game as well, and the last Astrodome game was also the last game of the NLDS.

← Cracks
From AFL to WWF →
Astros