On November 19, 1965, Rev. Billy Graham began a ten-day "Crusade for Christ." The first day drew 61,000 people, including Governor Connally and President Johnson, and that attendance record stood for years. The crusades were aimed at converting individuals in the crowd, which Graham did by encouraging every person to stand up, come forward, and accept Jesus. Thousands of people did just that. 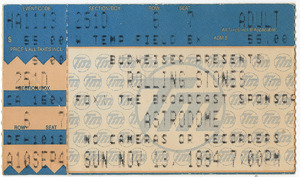 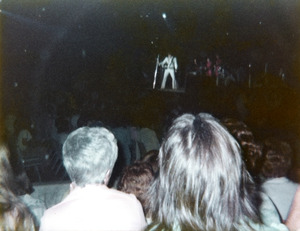 In 1942, The Houston Livestock Show and Rodeo brought in its first "star entertainer," Gene Autry for a performance. He would return five times, and by the early 1960s the tradition of concerts closing each day of the Rodeo was well-established. When RodeoHouston moved to the Astrodome in 1966, the tradition was continued and even expanded to attract larger crowds with more mainstream acts. Other performers also played the Astrodome, despite the lackluster acoustics; Judge Hofheinz and the Houston Sports Association struggled to find and configure sound systems capable of filling the massive structure.

Many of these performances broke records. The first concert at the Astrodome, Judy Garland's 1965 performance, attracted a crowd of 60,000 people, who paid prices ranging from $1.50 to $7.50 for seats. In 1974, Elvis Presley's performances closing the Rodeo broke his own record for attendance, with two shows totaling approximately 88,000 attendees. In 1995, Tejano superstar Selena set a record of 69,000 attendees at the final concert before her death. The final concert at the Astrodome, George Strait's 2002 "One Last Time" performance, shattered previous records, with 80,020 coming out to close the Rodeo and say goodbye to the Dome.

A list of performers at RodeoHouston can be found here. Pictures of many of the acts listed above can be found on the RockInHouston website from photographer Bruce Kessler.

For legendary stuntman Evel Knievel's two appearances at the Astrodome in 1971, promoters sold more than 100,000 tickets. The advertisement text was a masterpiece: "Appearing both nights if he survives Friday's appearance." Attendees got to see a demolition derby, and a powder-puff derby, and then the main event: Evel Knieval jumped successfully over 13 cars. Six weeks later, he set a world record in Ontario, Canada, by jumping over 19 cars.

The Astrodome in the movies

The Astrodome as a location for movies evolved over time in interesting ways. The first film was Brewster McCloud, starring Bud Cort of Harold and Maude. It was released in 1970. The film, which was described by Roger Ebert as "difficult," is about Cort as a strange man living in the Astrodome machinery, who is convinced by Shelley Duvall's character Suzanne to build a flying machine and fly it around the Astrodome. The film premiered in the Dome.

On a more populist note, George Hamilton's 1971 Evel Knievel included footage from his real jump the year before. While much of the film's pseudo-biographical script may have come from the imagination of screenwriter John Milius (who went on to write Apocalypse Now), the Astrodome jump, at least, was real.

The Lord of the Universe

The 1970s got stranger. The film The Lord of the Universe was released in 1974 to document a religious gathering the year before, called Millenium '73, held by a Divine Light Mission. The group's leader, Guru Maharj Ji, stayed in the Celestial Suite, and promised that within days the Astrodome would fly from the earth by the power of the devotees' meditation. Despite an outlay of $1.5 million on rental fees and promotion for the Astrodome and other Astro-vemues, which the group viewed as ideal for their celestial worship, turnout was sparse and the dome stayed firmly planted.

This sequel to The Bad News Bears came out in 1977, and it told the story of cool guy Kelly Leak reconnecting with his estranged father on the way to play an exhibition game in Houston. The Bears steal a van and drive all the way from California to Houston, only to have their Little League game interrupted so the Astros can play their scheduled game. Astro Bob Watson speaks the line "Hey, let the kids play," and the chant gets picked up by successive waves of people until the whole crowd chants "Let them play!" It was a strange foreshadowing of the chant that erupted during 2002 MLB All-Star game after it was called in the 11th inning.

Tejano superstar Selena played the Astrodome as the headliner for the rodeo on February 26, 1995, and she broke all previous attendance records, playing a sold-out show to nearly 69,000 people. Two years later she was tragically murdered.

The enormous draw of a Tejano star is indicative of how much had changed in Houston since the Astrodome was built thirty years before when, coincidentally, the 1965 Immigration Act became law. The Immigration Act opened the doors to non-European immigrants, and since that time 88% of immigrants to the US have been from places other than Europe.

Since that time the number of Latinos in Houston has more than doubled, growing by 74% in the 1990s and 43% in the 2000s. The African-American population meanwhile has grown at 20% per year, while Asian immigration grows the fastest of all.

Immigration gives Houston much of its famous hustle, like the kind Roy Hofheinz himself embodied. If he had lived to see the amazing diversity of his city, he would no doubt have invented new ways to draw them to the Astrodome.

← From AFL to WWF
Civic life and politics →
Concerts, stunts, movies, and sermons