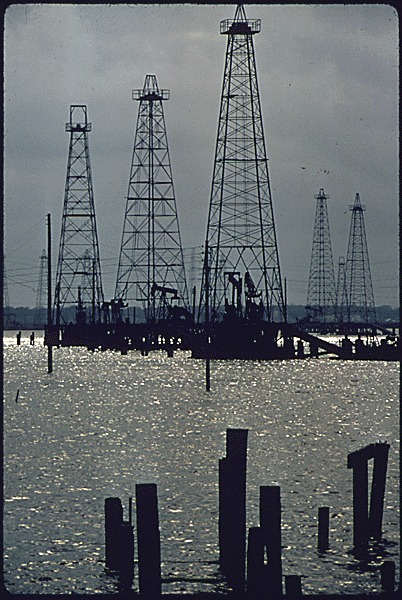 Texas oil production hit an all-time high in 1972, and the oil embargo causes prices to shoot up the next year—they quadrupled in just three months. Drilling and exploration increased as well. By 1981, oil production accounted for more than one-quarter of the state's economy.  Houston experienced a real-estate boom and soaring home prices.

Houston's reputation as "Space City" had faded over the years, especially after the final Moon landing in December 1972. In the 1970's, it became known as a wealthy, anything-goes, zoning-free oil boomtown with unlimited growth potential.

Then, in 1982, suddenly, prices plummeted. In the period from 1981 to 1986 the price of oil dropped from $37 to $14 a barrel. By 1987, Houston had lost nearly a quarter of a million jobs. According to economist Patrick Jankowski, this was "one of the worst regional recessions in U.S. history," not least because of over-building took a huge toll on the real estate industry. (atlantic)

Ten years later, oil production had been reduced by 50%. By the late 1980s employment in the oil and gas industry had significantly dropped, and so had tax revenues for the state, counties, and municipalities. 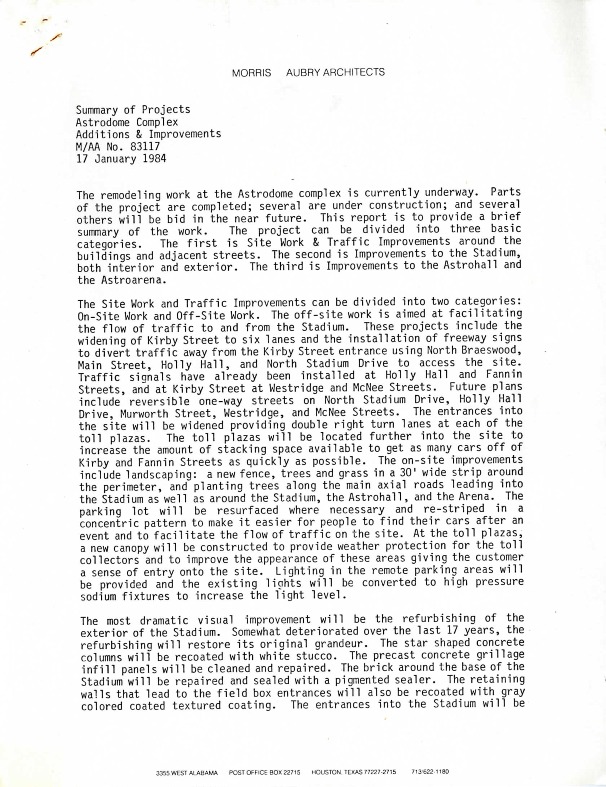 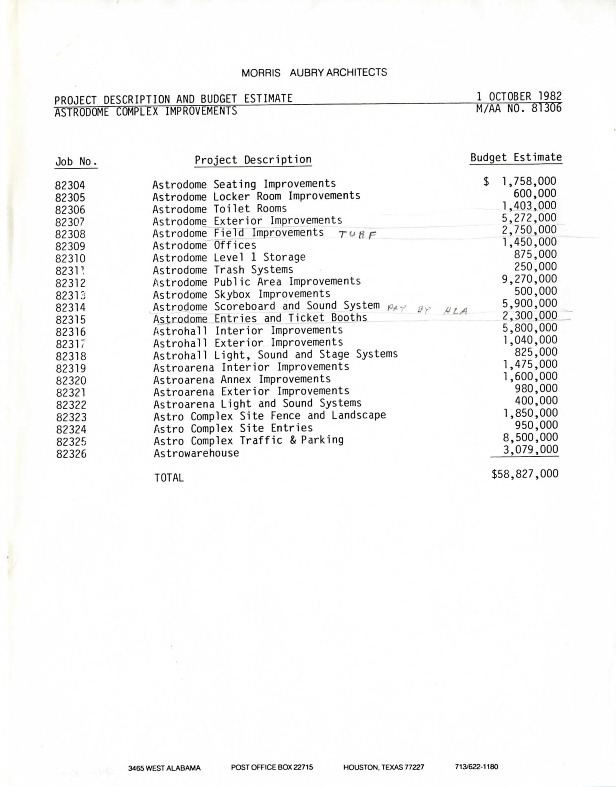 It was against this backdrop that Bud Adams asked the city for more money for his football team. Adams, owner of the Houston Oilers, had a contentious relationship with the Astrodome from the start, unable to come to terms with Roy Hofheinz until 1968. As the stadium aged, Adams grew more and more unhappy. In 1987, he toured the Gator Bowl in Jacksonville and threatened to move his team unless major renovations were made. Harris County spent $67 million on the changes to the dome, including 10,000 more seats.

The Oilers had success in the 1980s and 90s, making the playoffs seven times,  but never got further than the divisional championships. In the early 1990s Adams demanded a new stadium. Despite the luxury suites added in the 1987 renovation, Adams argued that he needed more to draw high-priced fans: in short, a new whiz-bang facility. He suggested one with a retractable roof, near downtown Houston. He courted both the Astros and the Houston Rockets, but neither team was interested in sharing a facility. When Houston and Harris County refused the request for a new stadium, Adams moved the team to Nashville after the 1996 season.

The building of the Astrodome marked the beginning of an age of expansion for major league baseball and the opening of 18 new stadiums. Many of the older, smaller ballparks (like the famed Ebbets Field, or the Polo Grounds) were torn down and replaced with stadiums in the suburbs that many fans felt to be charmless clones that lacked the quirks that made early urban parks distinctive. Many, like the Astrodome, were multipurpose and therefore larger. Fans lamented the loss of the intimate views of early parks--even if some of those views were stuck behind concrete pillars, a problem never faced by fans at the Astrodome!

In Toronto, the Blue Jays opened the first convertible stadium, with a motorized retractable roof, in 1989.  The SkyDome was in some ways a successor of the Astrodome (it was built for baseball and football; and even had an attached hotel) but it was also the last of its kind. During the next decade, the pendulum swung all the way back, and teams were building parks like Baltimore’s Camden Yards, that combined old-world charm and the comforts, views, food, parking and other conveniences demanded by modern fans.

As the 1990s drew to a close, Astros owner Drayton McLane began investigating the possibility of public funding for a new facility for his team. Especially after the drama of the Oilers' departure, the city took the threat of the Astros leaving seriously and passed a referendum allowing for the collection of hotel occupancy and car rental taxes to pay for a new park. The Brimer Bill passed in the Texas legislature the next year, and eventually a retractable roof stadium in downtown Houston was built for the team:  Astros Field.

Astros Field, renamed Enron Field in 2002 and now known as Minute Maid Park, boasted the first fully retractable roof in baseball, which can close or open in thirteen minutes. The new, modern scoreboard occasionally shows the old hand-drawn cartoons from the Astrodome scoreboard. Unlike the Astrodome, Minute Maid Field is downtown, and it became a means to both restore part of Union Station (now the park entrance) and revitalize the east side. On March 30, 2000, the Yankees came to town to play an exhibition game, just as they had 35 years before--only this time, the Yanks and 'Stros played on real grass.

In 1999, Houston became home to a new NFL franchise, the Houston Texans, more than 30 years after Judge Hofheinz had explored the idea. A new facility was built: Reliant Stadium. In 2000, the Astrodome and surrounding buildings were also renamed for Reliant. In 2014 the entire complex was be renamed NRG Park: it now consists of NRG Stadium, NRG Astrodome, NRG Center (built in 2002, formerly Reliant Center), and NRG Arena (formerly Astroarena/Reliant Arena).

The Houston Livestock Show and Rodeo, now known as RodeoHouston, decided to move the events previously held in the Astrodome to the new stadium. Longtime Astrodomain residents, and Dome partners almost from the beginning, the rodeo held their final events at the Astrodome in 2002. The last concert performed at the Astrodome was George Strait & the Ace in the Hole Band, who closed the Rodeo in February 2002. The concert was filmed, and For the Last Time: Live from the Astrodome was released in March 2003 on DVD.