On August 29, 2005, Hurricane Katrina devastated the Louisiana coast in less than 12 hours. Although the majority of the population of New Orleans evacuated before the storm hit, over 100,000 residents, primarily from the city's predominantly African-American lower Ninth Ward, were unable to leave. The storm and subsequent levee breeches flooded more than 85% of greater New Orleans, killing more than 1,400 people. Within two days, more than 20,000 traumatized people were sheltering in the Superdome with no power, clean water, or sanitation. Despite the horrific conditions, desperate people continued to arrive, and conditions quickly reached a critical point. On August 31, FEMA and National Guard personnel began to evacuate the Superdome, beginning with those in urgent need of medical care. Evacuees were transported on hundreds of city and school buses via Baton Rouge, Lake Charles, and Beaumont, headed for Houston and the Astrodome. 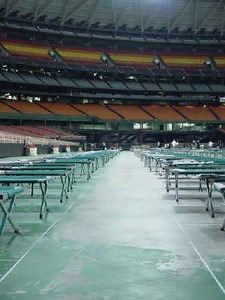 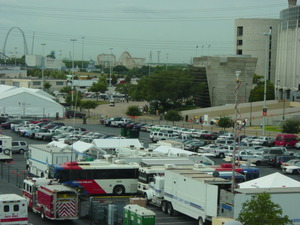 Using the Harris County Citizen Corps directory of member e-mail addresses, Sloan sent out a general e-mail announcing that New Orleans evacuees were on their way to Houston, and that Harris County "must build a city ready to receive them." Sloan got 1,000 responses per hour, flooding his inbox and crashing his personal e-mail system and the Harris County Citizen Corps website. When the site came back online a short time later, the directory contained over 2,800 new members and 38 new organizations.

Houston stepped up. People poured into the dome from around Harris County and beyond, wanting to help in any way they could. In the first 24 hours, the Harris County Citizen Corps processed over 8,000 volunteers, and then about 3,500 more per day after that. A total of over 60,000 volunteers assisted in the Houston response. 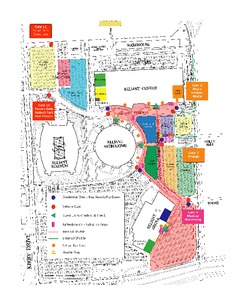 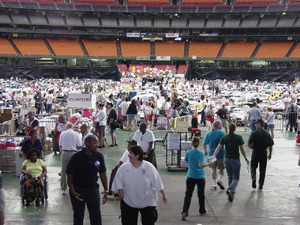 In New Orleans, people waited for hours in line at the Superdome for transportation to Houston. At 15,000 people, the Astrodome was declared to be at capacity. As evacuees kept coming, additional buildings were opened up, including the Reliant Arena, George R. Brown Convention Center,  the Reliant Center, and many local shelters. At its peak, on September 4, 2005, "Reliant City," as it was called, provided housing for 27,100 evacuees, with 17,500 of those at the Astrodome.

At the Astrodome, evacuees slept on thousands of cots laid out across the field. Volunteers gave out free food, tolietries, and other supplies, and doctors and nurses with the Harris County Hospital District tended to the sick. Dozens of Houston police patrolled, but there were very few incidents. There was a branch of the U.S. Post Office along with FEMA and Red Cross offices. Cable television, telephones, Internet connections, and cellular phone chargers were provided. Students were bused to schools around Houston. A "Town Square" provided opportunities for some fun, including basketball courts, an arcade and game room, and, for younger children, inflatable slides and bounce houses, with activities provided by local museums and children's centers.

Conditions in Houston were far better than in New Orleans, but many evacuees were still reeling from their displacement; the trauma of leaving their home, pets, and possessions; the uncertainty about the future; and most of all, anxiety about missing loved ones. The Dome's scoreboard now flashed messages from families seeking news of their loved ones instead of homerun spectactulars.

The Stars Come Out

In addition to evacuees, the Astrodome and Reliant City played host to celebrities once again. Talk show host Oprah Winfrey broadcast live from the floor of the Reliant Astrodome, and actor and comedian Jamie Foxx and news correspondent Katie Couric came to Houston to meet with evacuees.

New Orleans native and singer Harry Connick, Jr. performed at the Astrodome along with Delfeayo and Branford Marsalis. Three years later, he recalled the event:

All the people are down on the field level, and we were half a mile away up in the sky playing music. We were putting all our heart and soul into the music, and we realized that nobody cared. You couldn’t blame the people for not caring. I mean, they lost everything they had, and I don’t think they were in the mood for a concert. These poor people, the last thing they wanted to do was listen to music (Interview with Performing Songwriter, August 29, 2011).

Politicians also came to Houston. Former Presidents George Herbert Walker Bush and Bill Clinton came to Houston to announce the formation of the Bush-Clinton Katrina Fund to assist the victims of Hurricane Katrina. Barack Obama, then the only American American in the U.S. Senate, also visited, as did Rev. Jesse Jackson, Rev. Al Sharpton, and other African American leaders. Rep. Sheila Jackson Lee from Houston visited and then was instrumental in stopping a plan to relocate some evacuees to cruise ships off the coast, saying that "While the luxury cruise offer is quite generous, it is not what is needed now to help these people recuperate. We must return to normalcy, as quickly and readily as possible. I applaud the city of Houston for opening its schools, jobs and homes to help in a time in need, but such help much be accepted at a pace that is consistent with those who are suffering." 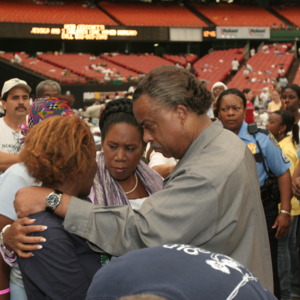 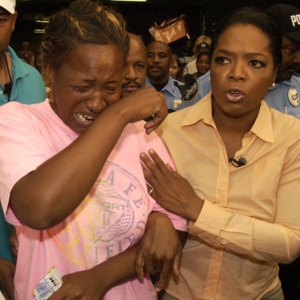 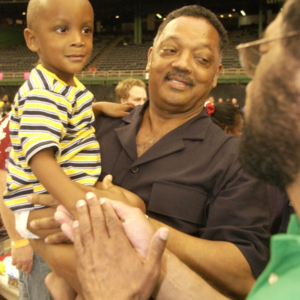 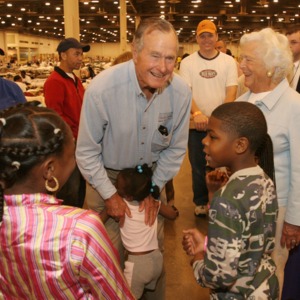 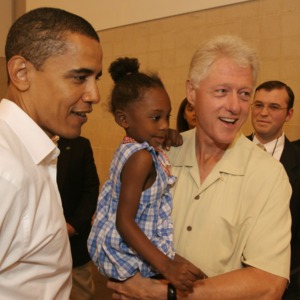 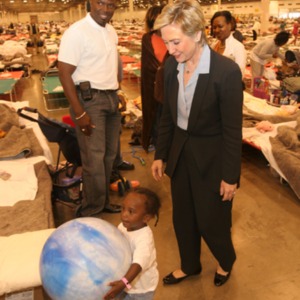 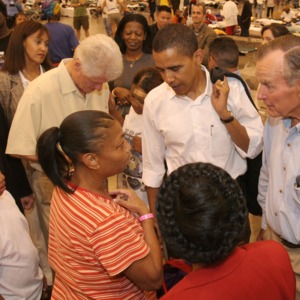 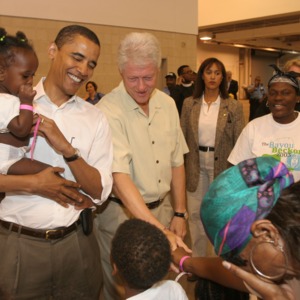 The end of an era: Coda

As its makers dreamed up the Astrodome in the 1960s, they envisioned different disasters. In the context of the Cold War, when schoolchildren practiced "duck and cover" to prepare them for nuclear war, it made sense to include elements of a fallout shelter in the design of the Astrodome--plus, Judge Hofheinz hoped to get subsidies from the federal government.

Though federal funds were eventually scuttled, many of the shelter elements remained in the design. Hofheinz was said to say that he "didn't give a damn about federal money. We're building the dome for bomb protection, if needed. It's going to be here for the people and if the government won't pay its share, okay!" (Ray, 273).

In 2005, forty years after opening, the Astrodome was outdated and out of fashion, rejected by its major tenants, and considered by many Houstonians to be an embarrassing reminder of sixties kitsch and extravagance without taste. Long gone were the days when the Judge Hofheinz and his Houston architects dared to build the world's largest room, without any kind of assurance that such a building was possible. The Astrodome survived, and despite seemingly having outlived its usefulness, it finally served one last essential function. In one of the darkest moments in American history, the Dome was there for the people.

As Harris County Judge Robert Eckels put it in an interview with the Houston Chronicle, "She's still a proud house. This was probably her highest calling."