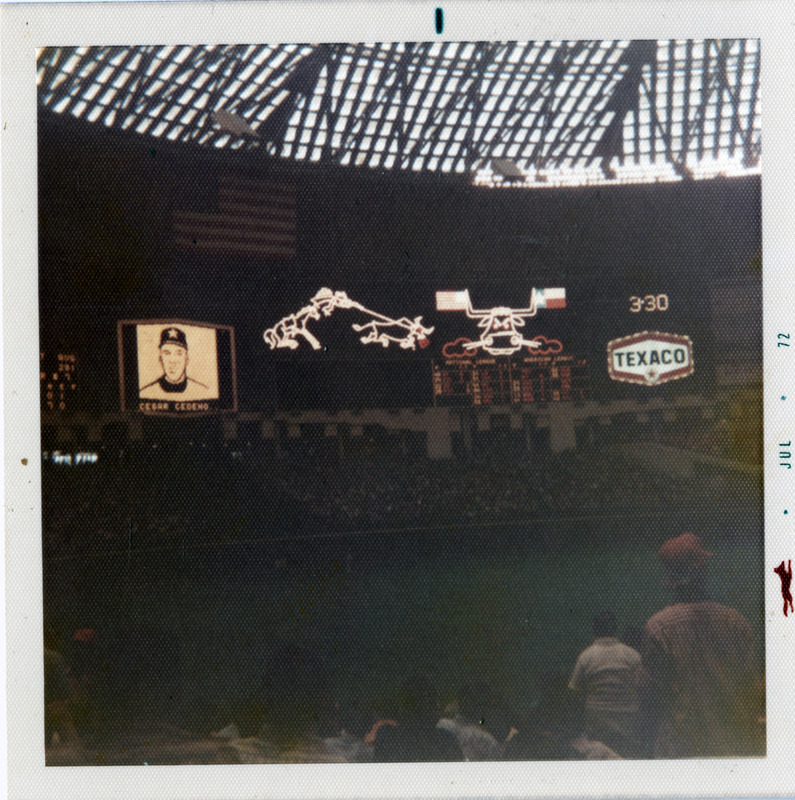 The Astrodome staff continued to have to manage the myriad issues caused by playing baseball indoors. In April 1965, the Mets accused the Astros of manipulating the HVAC to extend their own players' hits and to reduce the flight distance of hits by their opponents--in this case, the Mets. As reported by the Houston Post in May 1965, the Astrodome's head engineer said that if such a cheat were possible, the Astros would have a better season record. All the same, Major League Baseball sent a specialist to investigate. The charges were dismissed.

In May 1965, umpire Frank Secory complained that the scoreboard was being used to intimidate umpires after a fellow umpire, John Kibler, ejected three Astros in two back-to-back games. According to Associated Press reports, "flashed in lights on the scoreboard during the sixth inning of the Houston-San Franciso game was the comment 'Kibler did it again.'" The Astros general manager was forced to apologize.

The scoreboard was the object of much complaint and ridicule from sportwriters, who complained in particular about the forty-second homerun spectacular. In 1996, KHOU television in Houston responded in an editorial, "the easy way to keep it dark, if you can, is by stopping the Astros in the first place." 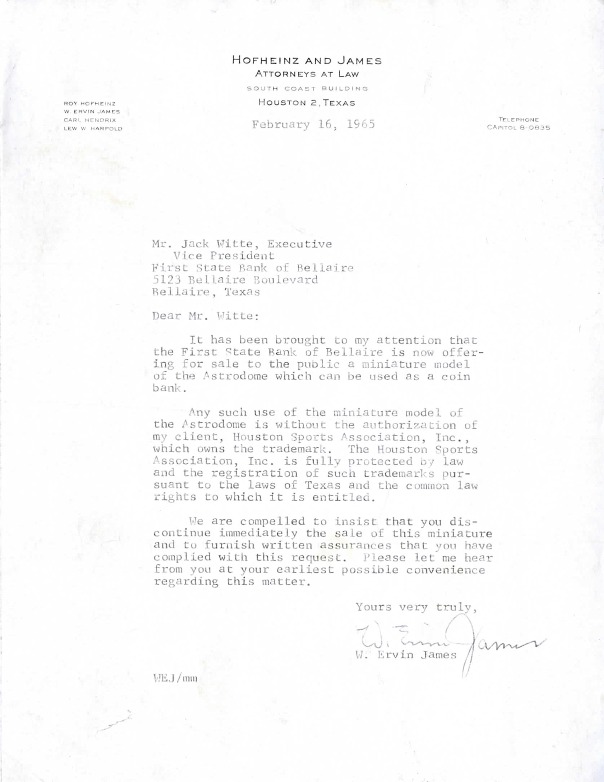 The Astrodome was the subject of many lawsuits and legal challenges. The first, launched even before the facility opened, involved rights to reproduce the building in souvenirs. A bank in Bellaire, Texas, near Houston, decided to make and distribute brass coin banks in the shape of the Astrodome. Hofheinz sent the bank a cease and desist letter, though it is not clear whether he had the right to do so. Outraged citizens complained that a public facility was being exclusively controlled by a private company.

A more significant lawsuit concerned the leaking roof. Roof leaks caused by improper installation fo the skylights plagued the stadium for several years after its opening; in 1966, a fan sent a letter to Hofheinz compaining that the leaks were so bad that his family had had to change seats during a game. Eventually, a four-way lawsuit between Harris County, the Houston Sports Association, the general contractor H.A. Lott, and the Associated Architects was filed; H.A. Lott was found to have been negligent and was forced to pay damages for repairs.

Later, lawsuits were filed by developers and citizens concerning fencing around the dome and over parking fees. A lawsuit over disabled access was filed in 1992, alleging that the Astrodome was not in compliance with the Americans with Disabilities Act of 1990 despite the addition of external pedestrian ramp columns. The U. S. Department of Justice investigated this claim, along with reports of limited access at hotels nearby.

More significantly, Harris County sued or threatened to sue the Houston Sports Association repeatedly in the 1970s and 1980s over failure to report income from their activities at the stadium, including the sale of souvenir brochures and tours. 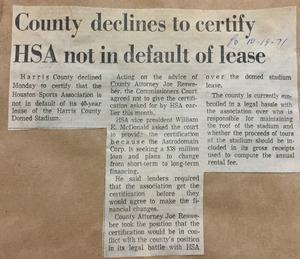 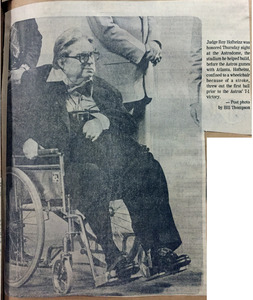 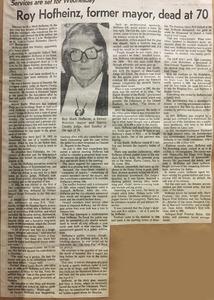 By the late 1960s Hofheinz was carrying a substantial amount of debt, and he had begun to experience liquidity problems because so much of his money was tied up in new ventures. The Judge's difficulties were compounded by the complexities brought on by the death in 1966 of his first wife, Dene, whose will specified that family money be put into trusts upon her death. The will cast doubt upon the Judge's financial assets as it went into probate. His lavish lifestyle, including his decision to expand his Astrodome suite into a full-time residence, did not improve his financial situation.

In 1971, the Houston Sports Association attempted to re-finance some of the debt they carried, shifting from shot-term to long-term financing. The bank asked teh Association to given them certification by Harris County that they were in compliance with the terms of the Astrodome lease, one of their chief financial assets. Harris County refused to certify the lease, in large part due to ongoing questions about HSA's reporting of income from activities such as tours and sales of souvenirs. Hofheinz's creditors used this and other accounting questions to force him to appoint a financial manager, and by 1972, Judge Hofheinz was no longer in primary control of the Astrodomain.

The Judge's other assets were wide-ranging, and some of them were troubled as well. In 1967, Hofheinz had acquired part of Ringling Bros and Barnum and Bailey Circus, and in 1969 he became the majority owner. The following year, the circus merged with the highly successful toy company Mattel, makers of Barbie and Hot Wheels. In 1973 Mattel was investigated by the Securities and Exchange Commission. The SEC discovered losses previously hidden by fraudulent accounting and Mattel's stock price dropped dramatically, taking much of Hofheinz's wealth with it. Although Hofheinz charged Mattel with fraud and filed a lawsuit on behalf of his family and other Ringling Bros and Barnum and Bailey shareholders, his losses were enormous (Ray, 527-9).

In 1975, the Astros' season attendance dropped below one million for the first time since the Dome opened. By 1976 Hofheinz was forced to sell the Houston Sports Association, parent company of the Astros, although the team's new owners promised to keep them in Houston and in the Astrodome. The Judge moved out of the Astrodome residence at this time as well, hiring 48 moving vans to transport all of his antiques (Gast, 175).

The sell-off began. In 1975, Six Flags leased AstroWorld, and purchased the park outright in 1978. The hotels were sold in 1976 (Gast, 174) Astro Bank closed in 1978. Hofheinz entered retirement. On September 20, 1979, the head of the HSA and owner of the Astros, John McMullen, honored Hofheinz in a ceremony at the Astrodome. It was one of the Judge' last public appearances, and he died of heart failure on November 22, 1982.