The Astrodome was paid for by the people of Harris County, and it was always the intention of Judge Hofheinz that it be used for community events as well as sports. Moreover, in exchange for their contract to lease the stadium, the HSA was responsible for $750,000 in rent plus $2 million in maintenance.

Therefore, whenever the Dome was not being used by the Astros or the rodeo (and after 1968, the Oilers), the HSA rented it out for events of all kinds. Non-baseball bookings at the Astrodome included the 1965 Boy Scout Jamboree, a home builders’ convention and a boat show, among others. The Astrodomain hotels were intended to provide lodging for out-of-town attendees. 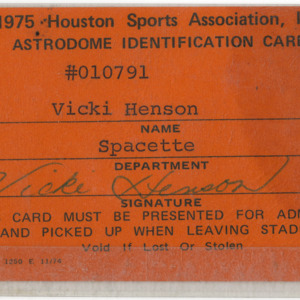 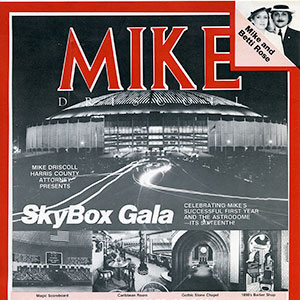 The Astrodome and the buildings that grew up around it employed thousands of people through the years. Some economists calculate the total benefit to the area to be at least $4 billion. (Columbia)

From the local architects to the Astroworld ride operators, generations of Houstonians made their living in some way related to the Astrodome. The most well-known were those who worked at the Astrodome: the Spacettes (hostesses), Earthmen ("grounds" crew), and the Space Cadets (parking attendants).

For state and local politicians who could afford to rent some part of it, the Astrodome made an excellent place for rallies and fundraisers, especially in the early years when going to the Dome was itself a draw. Harris County Attorney Mike Driscoll, for example, featured the Astrodome prominently on his invitations. Driscoll went on to serve from 1981 to 1996. 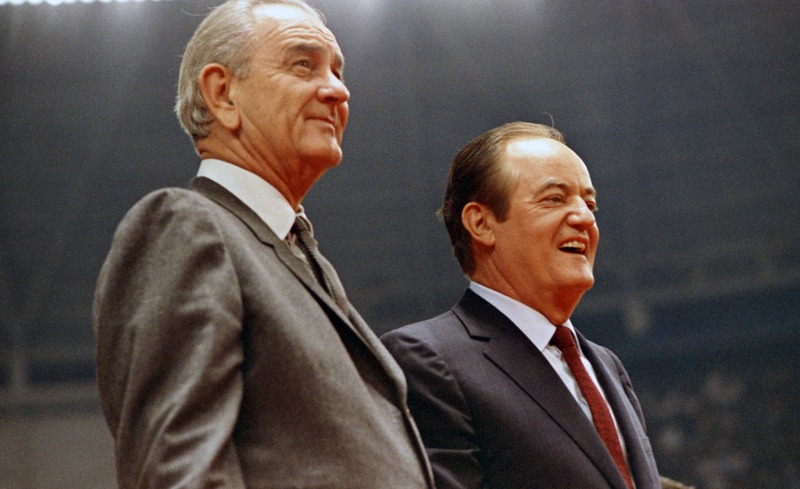 One non-baseball event that Hofheinz hoped to bring to the Astrodome was the 1968 Democratic National Convention. It was expected that President Johnson would be the Democratic candidate, and his long-time supporter Hofheinz hoped that as a native Texan LBJ might be convinced to bring the convention to his home state. Ever open-minded, Hofheinz pursued the Republicans as well, though they eventually opted for Miami, where they nominated Richard Nixon.

On March 31, 1968, however, LBJ announced that he would not run. Hubert Humphrey emerged as the presumptive Democratic nominee, especially after the assassination of Robert F. Kennedy in August. The Democratic National Convention was held that August in Chicago, not Houston, and footage on the nightly news of the ensuing riots and police brutality arguably doomed Humphrey's chances. The rest, as they say, is history.

LBJ and Humphrey did come to the Astrodome in 1968, two days before the election. Turnout was good: 55,000 people came, although some may have left after Frank and Nancy Sinatra warmed up the crowd, before the speeches began. 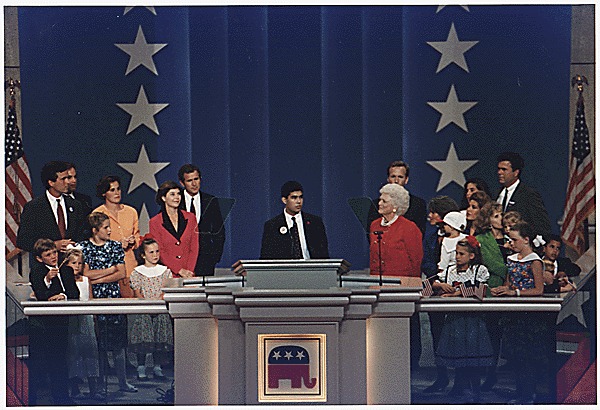 In 1992, the Republican National Convention finally came to the Astrodome. To make it happen, organizers "persuaded the Houston Astros to embark on the longest road trip any major league team has taken since the invention of the airplane," as the New York Times put it. Because of the comparative isolation of the Astrodome from the rest of Houston, and Houston's notorious traffic, transportation was a major concern. Organizers ran hundreds of shuttles from hotels to the Astrodome and elsewhere around the city.

Something of Hofheinz's showmanship touched the 1992 convention: there were topiary elephants, and an eleven-foot chocolate elephant, and a live elephant. Sections of the Berlin Wall were recreated in the Astroarena. The convention delegates nominated President George H. W. Bush and Dan Quayle, as expected. It was also notable for what turned out to be former President Ronald Reagan's last major speech:

In 1977, the Astrodome was the site of a conference protesting the National Women's Conference, which was held across town at the Houston Civic Center on November 18-21. About 15,000 participants attended the protest, which they described as a "pro-God, pro-Life, pro-Family rally." Footage of the protest begins at 00:44:26.