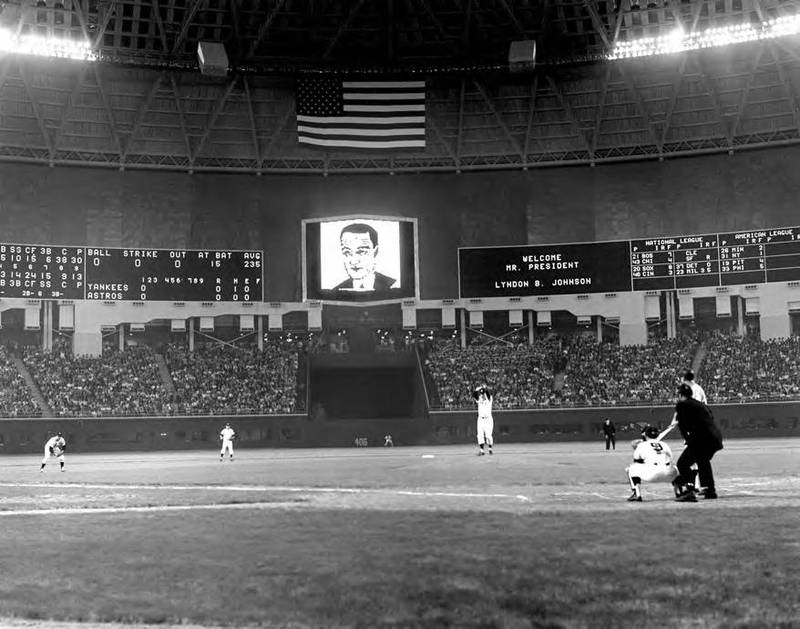 After parking in the lots surrounding the stadium (accommodating 30,000 cars), fans entered the Astrodome halfway up the 6 risers of seats. They perhaps stopped to buy a hotdog or ogle the Spacemen and Earthmen working the concession stands or elsewhere interacting with the public. One of the Astrodome’s many innovations was the food, which offered an unparalleled range of options and themes. There were five restaurants that could seat more than 3,000 people at once, in addition to all of the concessions.

Attendees on that first night may have noticed right away that it was cold : as HVAC engineer Naman later recounted, in the face of public doubts about the efficacy of air-conditioning such a large space, he made the showtime decision that his staff would turn the air conditioning up full blast, set to 67 degrees. 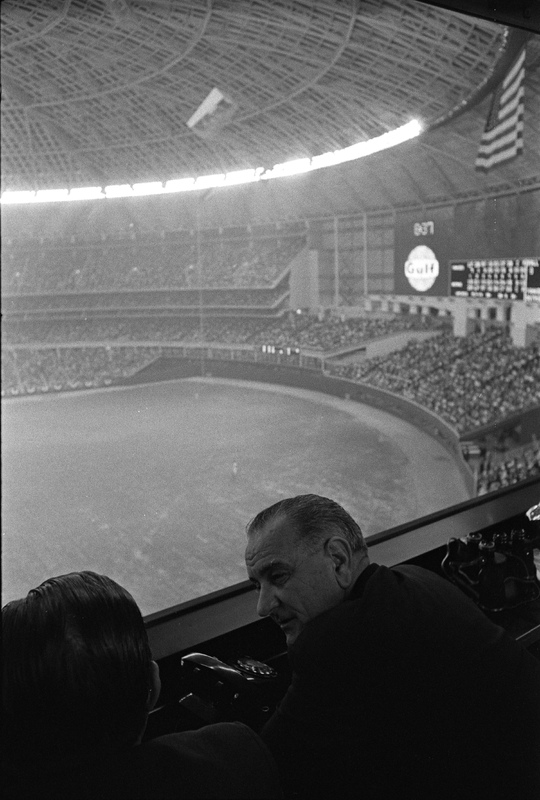 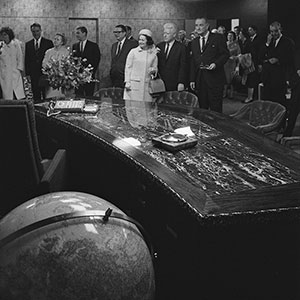 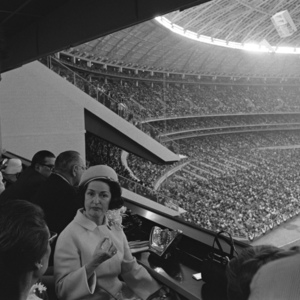 The evening opened with Governor John Connally giving out bouquets and making a speech. Hofheinz was bustling, preparing for a bigger fish than Connally: President Lyndon Johnson. Johnson and Hofheinz went way back. He worked on LBJ’s Senate campaigns  in 1941 and 1948,  and the two men had an important connection in Houston PR man turned White House advisor Jack Valenti. Valenti was one of the President’s closest aides and instrumental in getting LBJ to the Astrodome on opening night.

LBJ and Lady Bird watched the game from Hofheinz’s private quarters, the most elaborate of the private boxes on the upper level. All of the 53 private boxes were luxurious, and expensive: despite being the furthest from the field, Hofheinz had indeed made them the most desirable. Hofheinz and Smith wanted their dome to be affordable for the public, but they also built in plenty to tempt Houston’s upper class, though they were careful to repeat again and again that no public money was used in their furnishings.

Each box was different, containing between 24 and 30 seats and a private restroom and bar, and designed around themes ranging from Old West to Las Vegas to Modern Bank. Box holders would agree to lease the boxes for 5 years, at rates beginning at $15,000, and the holders would then have access to their box every day from 11am-11pm whether or not there was a game. As ever, Hofheinz paid attention to details. There was a maitre d' serving appetizers, and a private club serving full meals. Box holders received special broadcasts on closed-circuit TVs before the game. Even the background colors of the walls were supposedly chosen to flatter wives and girlfriends.

For everyone else, there was still plenty about the Astrodome to admire. By all accounts, the "Astrolite" scoreboard was extraordinary. It was 474 feet by 57 feet tall and contained 10,000 individual lights that could display programmed or live-action shadow puppet-like displays ("Astrograms") to the whole stadium. When LBJ arrived, after having been delayed by a phony bomb threat, his image was displayed on the screen to loud applause. The game went 12 innings and the Astros won, 2-1. 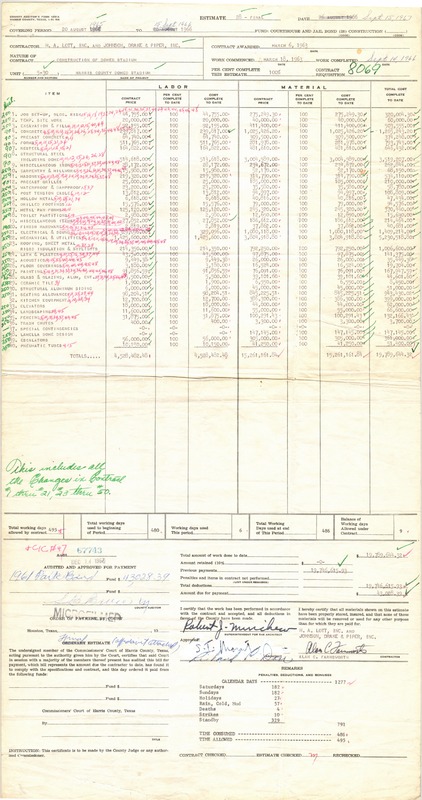 Three days after the opening Hofheinz announced that the grass was not doing well and the next Astros season would be played on artificial sod. The glare was still a problem for the players during day games, and Hofheinz received more than 1,000 letters with suggestions on how to fix the problem--a mark of the fame of the Astrodome. To deal with the problem, a few weeks later Hofheinz ordered acrylic paint applied to the skylights, over the objections of the architects. This cut the natural light into the stadium by 25-40%. It solved the problem of glare, but it also killed the grass, and it was now so dark inside that the stadium lights had to be kept on all the time. Some of the 1965 season was played on dead, painted grass.

Along with the extra expense of the lights, unexpected problems also popped up with the air conditioning. The engineers found that unless it was on all the time, condensation formed inside the dome and it became misty. The final cost of the stadium was roughly $40 million, with $20 million of the spent on the stadium structure itself. The Houston Sports Association contributed $6 million for upgrades to seating, skyboxes, restaurants, and the franchise offices, plus a $2 million scoreboard. The tensions of the stadium construction led to a rupture between Smith and Hofheinz, resulting in Hofheinz buying Smith out in the fall of 1965; Hofheinz also brought out George Kirksey in the spring of 1966, leaving Hofheinz with ownership of more than 80 percent of Houston Sports Association stock and virtually sole control of the Astros franchise and the Astrodome lease. Perhaps because of his increased financial pressures, Hofheinz decided that the Oilers contract was unacceptable, and the Oilers temporarily moved to Rice Stadium.

Still, the Astrodome appeared to live up to the wildest expectations of its backers and promoters. By October 1966, nearly 7 million people had visited, and the Astrodome was rated the third most popular tourist destination in the United States. Even the Oilers would come back, leaving Rice for the Astrodome in 1968. The new Astroturf would be installed in January of 1966, and, as Hofheinz promised, the season was played on the artificial surface. This was yet another innovation soon to be widely imitated across the world of sports. The Astrodome would be an symbol of Houston ambition, style, and know-how and a source of pride for years to come. It would also be a center of civic life, and the backdrop for many personal memories of generations of Houstonians.