The design, and paying for it 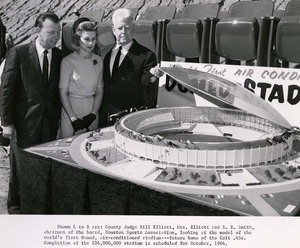 Now all they had to do was build it! It was a daunting prospect. The Harris County Domed Stadium was designed to be the largest fully enclosed, air-conditioned stadium ever constructed, containing the longest open span ever built.  The record for longest clear span—the distance between walls or support towers—had previously been held by the Union Tank Car Building near Baton Rouge. Designed by Buckminster Fuller using his geodesic design and completed in 1958, the dome spanned 384 feet: the Astrodome would end up at 642. Furthermore, it would be configurable for baseball, football, exhibitions, boxing matches, and any other use that required a large open space.

In 1958, the Harris County Board of Park Commissioners had hired two architectural firms, Lloyd and Morgan and Wilson, Morris, Crain & Anderson to develop plans for a stadium using the $20 million revenue bond approved by voters that July. The "Associated Architects," as the two firms referred to themselves, began the process of searching for a site and determining requirements for the structure. In 1960, soon after Hofheinz joined the Houston Sports Association, he began pressuring the architects to design the dome of his dreams, based on the ideas he had absorbed from Fuller. In fact, he threatened to dismiss the architects and hire Fuller's company to design the Domed Stadium (Gast, p. 51). 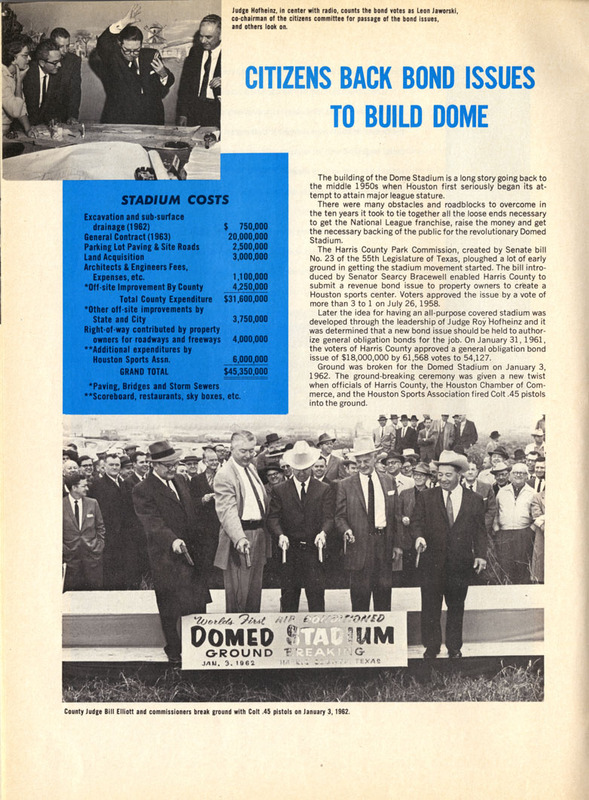 From the book "Inside the Astrodome," by the HSA. Courtesy University of Houston Special Collections.

Hofheinz and the HSA also wanted to adopt an aggressive time frame in order to have a stadium ready for the 1962 season. The challenges were significant. For one thing, the Domed Stadium would be more expensive than the traditional open-air stadium originally proposed, and the architects informed the county and HSA that additional funding would be required. In 1960, the Harris County Commissioners Court agreed to propose a $22 million general obligation bond measure for approval by Harris County voters, of which $15 was earmarked for the stadium itself, with the rest dedicated to land acquisition ($3 million) and service roads ($4 million).

The success of the general obligation bond measure was not assured. Although common now, in 1961 it was unusual for taxpayers to fund the building of stadiums, and there was significant resistance to HSA's proposal. Unlike the previous revenue bond measure, under which the bond would be repaid from stadium proceeds, a general obligation bond would be paid for by taxpayers. Some of the opponents of the measure were old enemies of Hofheinz; others were suspicious of using public money to build a stadium that would be leased to a private syndicate. Even the newspapers were divided: The Post approved, the Chronicle opposed, and the Press agonized and then eventually came out in favor of the measure. Hofheinz embarked on a PR campaign across Harris County, complete with rallies and speaker trucks. 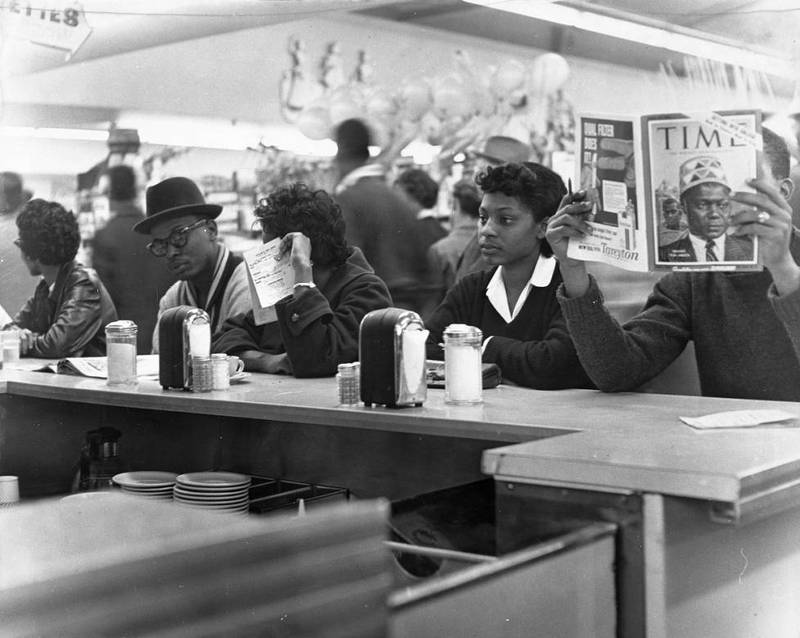 The Judge also cultivated a bloc of crucial allies: the city's African Americans. Houston had already quietly desegregated many of its private spaces, such as supermarkets, drugstores, and restaurants. The desegregation was generally peaceful and low-key thanks to a three-way pact between civil rights leaders, the business community, and the media to keep racial issues out of the news following sit-ins at Weingarten’s Store, Mading’s Drug Store and the cafeteria at City Hall. Hofheinz saw desegregation as an opportunity to create support for the bond measure, drawing on his past history of integrating City of Houston libraries, golf courses, and restrooms as mayor. He contacted African-American leader Quentin Mease, director of the South Central YMCA, who agreed to support the bond on the condition that the stadium be fully integrated. Smith and Hofheinz agreed, and the bond passed comfortably in Jan. 1961 with overwhelming support from African Americans. Sale of the bonds was delayed for several months, however, due to a lawsuit by Dome critic Ned Gill. 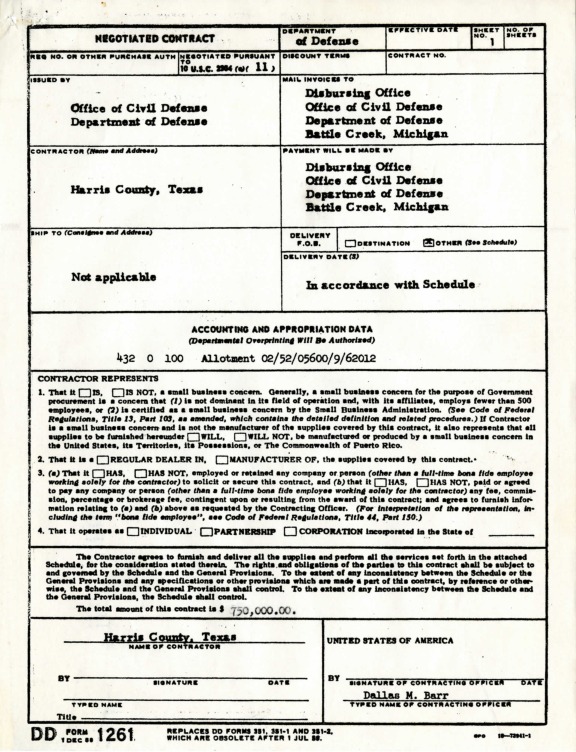 Also in Jan. 1961, the HSA purchased the minor league team the Houston Buffaloes (aka the Buffs), a requirement imposed by the National League. The HSA held a competition to rename their new team; the winning entry was Colt .45s, after the revolvers worn by Texas Rangers. Paul Richards was hired to be the team's general manager.

In May 1961, the architects began working on the final plans and specifications for the stadium. They kept the dome but used a Lamella truss design instead of the geodesic design. They laid out the interior to accommodate both baseball and football, though Houston's professional football team, the Oilers (est. 1960), had not yet agreed to move into the stadium.

Meanwhile, as Hofheinz and the County Commissioners became nervous that there would be a funding shortfall even with the second bond, they drew up plans for the stadium to serve as a fallout shelter in the event of nuclear war, and submitted this plan to Washington. President Kennedy announced his approval on Aug. 12, 1961. This approval meant that Washington would supply grant funds, about $750,000, to add the shelter functionality. Although these funds were eventually denied, the news stories about the fallout shelter proposal helped promote the idea of the Domed Stadium as a public facility. The fallout shelter also became part of the mythology of the Astrodome and played a central role in the 1970 movie Brewster McCloud, directed by Robert Altman, which was filmed in and premiered at the Astrodome.

← Hofheinz the Huckster
Site selection and groundbreaking →
The design, and paying for it