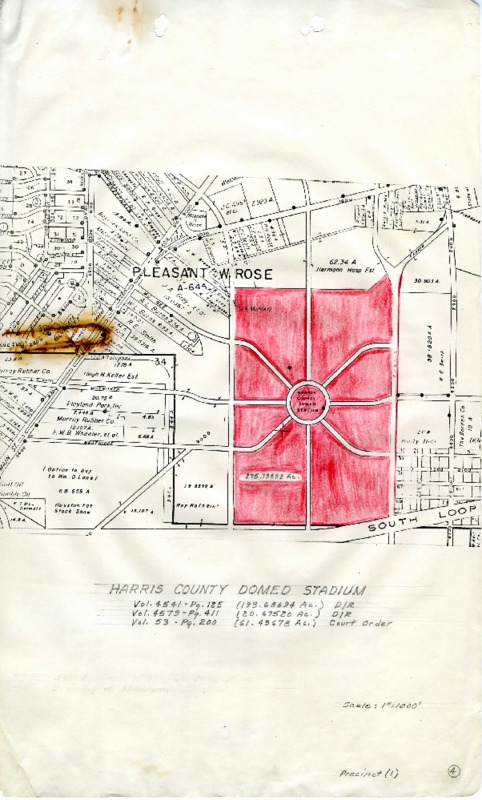 In 1959, the Associated Architects conducted a site-selection study to locate at least 200 acres they could use. Site selection remained a challenge for nearly two years. Six criteria were used in evaluating sites:

Memorial Park in downtown Houston was briefly considered as a location, but after protest from Ima Hogg, whose family had originally donated the land to Houston, this site was eliminated as a possibility. 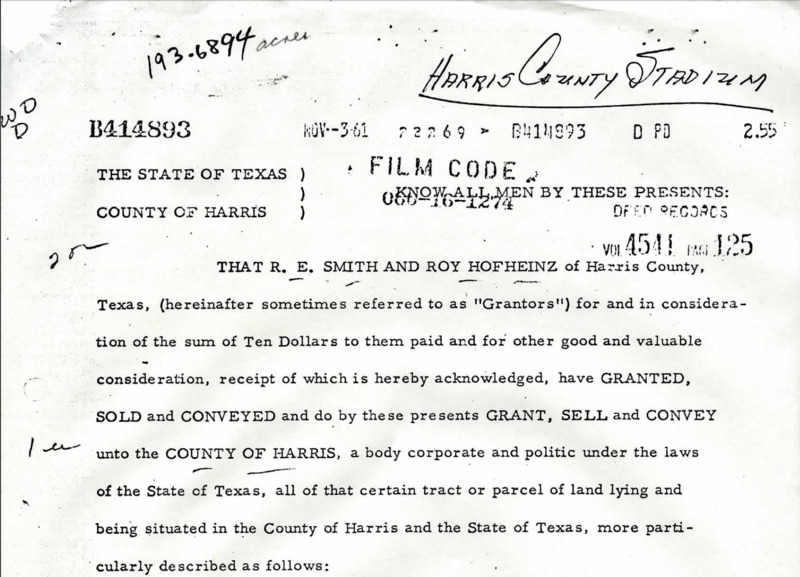 Deed for 193.6894 acres of land out of the P. W. Rose and J. Waters Survey. Image courtesy of Harris County Archives.

On Aug. 22, 1960, the Harris County Parks Commission announced the consideration of a new site, near Main-Knight Road-Old Spanish Trail. Individual parcels were owned by the Hermann Memorial Hospital, the Hilton Hotel corporation, and HSA member Robert E. Smith, whose extensive property interests made him a potential owner of almost every possible site.

On Aug. 28, 1961, Smith and Hofheinz, acting for the HSA, purchased 494 acres from the Hilton corporation, of which 180 would be used for the Astrodome site. The HSA resold the land to the county for the same price, coming in at $2.5 million instead of the agreed-upon $3 million, but Hofheinz added the requirement that the commissioners must also pay for drainage of a site for a temporary outdoor stadium that the Colt .45s could use during construction of the permanent domed stadium. Smith and Hofheinz retained several choice pieces of land to develop privately, after the stadium was complete. Construction on the site was scheduled to begin in November 1961.

As part of their agreements with the County, Smith and Hofheinz agreed to donate $1.5 million in right of way to help with road construction. The city extended Kirby Drive, which became the western boundary of the site, and the county extended Fannin Drive, the eastern boundary. Hofheinz worked with the Texas Highway Department to prioritize construction of the South Loop portion of loop 610, which had been proposed for construction in 1954; plans for the South Loop were drawn up in 1962 and approved for construction in 1963.

The parties also signed the contract for the second, outdoor stadium for the Colts, to be built on the new site and completed by Feb. 1, 1962 so that it could be used in the 1962 season. Meanwhile, HSA signed a contract with the Fat Stock show for periodic use of the dome and year-round use of a second building (the Astro Hall), which was added to the architects' set of designs. 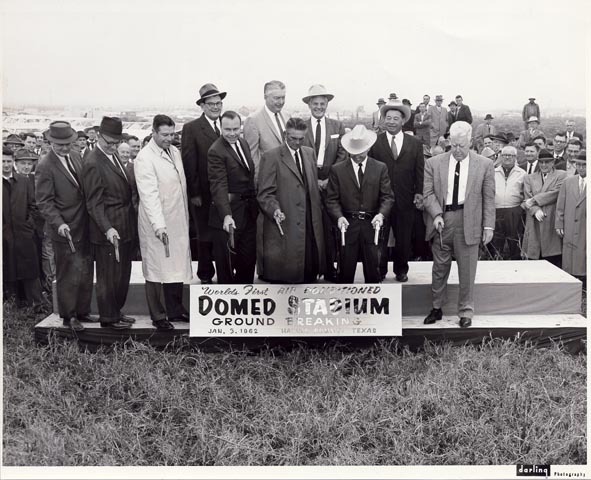 The groundbreaking—with Colt .45s instead of shovels--took place on Jan. 3, 1962. Groups of men took their turns at the dais for the photographers: first the County Commissioners, then the HSA, and finally a group of African American community leaders with Quentin Mease, who had argued successfully for integration of the new stadium.

In 2008, as part of the Houston Oral History project, Mease recalled the event:

"Hofheinz was down here on the ground ... and he told us, 'Now, when the photographer drops his arm, then you shoot. Fellows shoot. Now, break ground.' . . . .  He dropped his arm and we pulled the trigger but there was no shot heard. And everybody laughed . . . .  we did not know what to do. They were the old 45 guns and we did not cock them. You had to cock them before you could . . . so then we cocked the revolvers and fired and broke ground."

← The design, and paying for it
Excavating "Lake Elliott" →
Site selection and groundbreaking